Dr Zafarul Islam Khan Apologizes For His Tweet but said Tweet not deleted, I stand by it 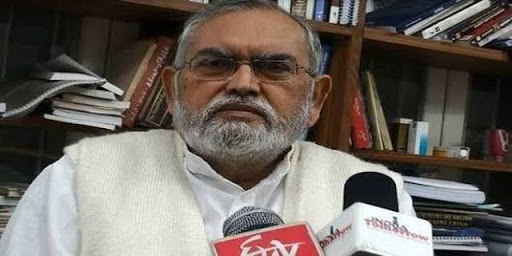 NEW DELHI — Delhi Minorities Commission Chairman and veteran journalist Dr Zafarul Islam Khan has been booked by the city police under sedition charges for his 28th April tweet in which he had “thanked” Kuwait “for standing with Indian Muslims.”

An FIR was filed by a Vasant Kunj resident against Dr Khan under IPC sections 124 A (sedition) and 153 A (Promoting enmity between different groups on grounds of religion, race, place of birth, residence, language, etc., and doing acts prejudicial to maintenance of harmony). The FIR was later transferred to Special Cell, the anti-terror squad of Delhi Police, reports Hindustan Times.

When contacted, Dr Khan refused to comment on the police case. “No comment,” he said to the query.

Day after the tweet, Dr. Khan had issued a clarification statement.

“This tweet is in the background of how the issues of Muslims have been dealt with in our country, be it lynching, riots, media bashing or redressal of their problems in political and administrative processes,” he said on April 29.

“I have not complained against my country to any foreign government or organization nor I intend to do so in future. I am a patriot to the core and I have always defended my country abroad. However, at the same time I have always been vocal about the problems in our country like any other country but, I also believe that we and our political, constitutional and judicial system are capable to tackle them. According to my knowledge, Indian Muslims have never complained against their country to outside powers. I, like other Indian Muslims, believe in rule of law, the Indian Constitution and the fine institutions our country has,” Dr. Khan said in his statement.

Dr Khan also said that a section of media distorted his views and he would take legal action against them.

“I issued a tweet on my twitter handle. Nothing more should be added to this tweet as done by some media establishments. My views have been distorted on a few electronic media forums and many false statements/opinions have been attributed to me. I will take appropriate legal steps available to me against them,” Dr Khan said.

In the last two weeks, several renowned individuals in the Arab World went to Twitter and condemned incidents of Coronavirus-driven hate crimes against members of minority community in India.

Dr Zafarul Islam Khan Apologizes For His Tweet but said Tweet not deleted, I stand by it

On May 1, Dr Khan issued another statement over the issue and apologized for his “ill-timed” and “insensitive” tweet.

“The tweet issued by me on 28 April 2020 thanking Kuwait for taking note of the persecution of Indian Muslims, in the context of the North East district’s violence, has pained some people which never was my intention. I realise that my tweet was ill-timed and insensitive in view of our county facing a medical emergency and fighting an unseen enemy. I apologize to all whose sentiments were hurt,” said Dr Khan.

“The limitation of a tweet, which has to be very short by its very nature, was also responsible that the whole narrative was not made out in plain language. The matter was blown out of all proportions by adding things into it which was neither my intention nor was meant. A section of media added lies into it, distorted and fabricated its content and attributed inflammatory opinion into it. I did not say so nor intended such things as they have been attributed to my tweet,” said Dr Khan.

He further said that he has always defended his country and has never complained against it to any other country: “I have already stated in my previous statement as to how I have defended India in the Arab world on crucial issues. I will continue to do so, far from complaining against my country to any other country or Arab or Muslim world. This is against our Constitution, against my own views, upbringing and against my religious belief which teaches me that ‘love of homeland is part of Islam’”.

Dr Zafarul-Islam Khan issued the following statement via tweet today, Sunday, 3 May 2020: “It has been erroneously reported in a section of media that I have apologised for my tweet of 28 April and deleted it.

The tweet is very much there on my twitter handle and facebook page. Moreover, I have said in my 1 May 2020 statement that I stand by my views and convictions.

I will continue, now and in future, the fight against hate politics in the country. FIRs, arrests and imprisonments do not change this path which I have chosen for myself consciously years ago to save my country, my people, the Indian secular polity and the Constitution.”