New Delhi, India - As Shahin Kausar steps down from the makeshift stage set up in the Muslim enclave of Shaheen Bagh in the Indian capital of New Delhi, it is difficult to hear her speak.

Her words are no longer amplified through a sound system, and the man now holding the microphone is drowning her out with boisterous slogans.It doesn't help that Kausar herself is also on the verge of losing her voice from weeks of shouting. But she is clear why she is in Shaheen Bagh.

"When I saw in front of my eyes, the passion in the people here, they were outraged... That's why I had to come and join," says the 44-year-old activist.

For more than two weeks now, protesters, such as the ones in Shaheen Bagh, have taken to the streets across India to oppose the passing of the contentious Citizenship Amendment Act (CAA), which critics say discriminates against Muslims and violates the country's secular constitution. 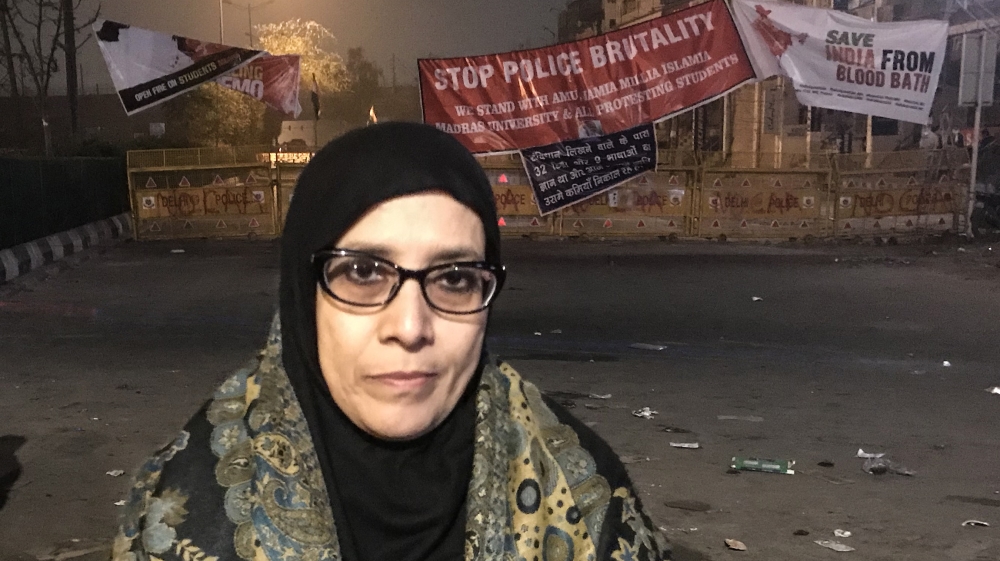 In the Indian capital, the protesters of Shaheen Bagh - especially women such as Kausar - have stood out.

For 16 days now, these women have occupied a part of the main highway, blocking traffic between the capital and Noida, a satellite city. And they don't plan on going anywhere.

"We are here to fight for our rights, our concerns," says 53-year-old Tarannum Begum at the sit-in. "Until they take back their [policies], this will go on."

Away from the limelight of protests in Central Delhi - dominated largely by English-speaking protesters from higher socioeconomic backgrounds - Shaheen Bagh has become a symbol for more vulnerable communities on the fringes of the city.

Until they take back their [policies], this will go on.

Police have cracked down brutally on many protests, particularly in Muslim areas and universities, vandalising homes, using tear gas and batons even on children, and opening fire on peaceful protesters.

At least 26 people have been killed across India, with most deaths reported from Uttar Pradesh, India's most populous state governed by Prime Minister Narendra Modi's Bharatiya Janata Party (BJP).

The majority, if not all, of those killed were Muslim. Thousands have been detained, mostly in Uttar Pradesh, whose hardline chief minister had vowed revenge on the protesters.

But the demonstration at Shaheen Bagh has remained peaceful, even as protesters remain resolute in opposing Modi's Hindu nationalist government.

At the heart of the unrest is the CAA, which provides a path to citizenship to refugees who arrived in India before 2015 from three neighbouring countries, as long as they are not Muslim.

Muslims fear the CAA is a precursor to a nationwide National Register of Citizens (NRC), as repeatedly indicated by India's powerful Home Minister Amit Shah.

Recently, the NRC process in the northeastern state of Assam excluded 2 million people, many of them Muslims, effectively rendering them stateless. They now fear either detention or deportation.

Meanwhile, several detention centres operate and are in the works across Assam and in other parts of the country to detain undocumented migrants, triggering fears among Muslims of mass incarceration.

A nationwide NRC would force all Indians to prove their citizenship with documentation, something India's mostly impoverished people of all religions lack.

But women say they are particularly vulnerable.

"I don't have a husband, and us ladies don't even get property papers," says Begum, a widow. "Everything is in the name of the husband, so how will a woman prove [citizenship] through her papers?" 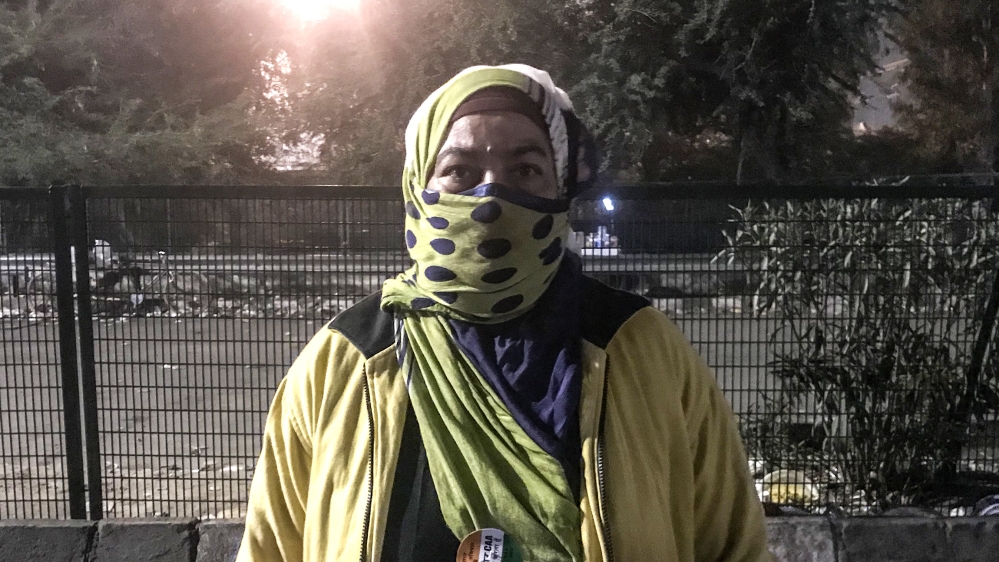 At Shaheen Bagh, the chilly air caused by New Delhi's record winter has a mix of both anxiety and determination.

For 16 days and despite biting cold, crowds have gathered here non-stop, with a legion of volunteers running the show. Protesters huddle over bonfires with free snacks and tea, while women sit in an enclosure next to the stage.

Many women, mostly housewives such as Kausar and Begum, say they have not gone home for days.

"I've been wearing the same set of clothes for the past three days… I have only managed to go home once," says Begum.

I have nothing to prove [my status], I am just a poor man.

Shaheen Bagh is barely 2km (1.2 miles) from Jamia Millia Islamia, a predominantly Muslim university, which was the site of a brutal police crackdown on December 15.

Over 100 students were injured when police stormed the campus with tear gas and batons following clashes at an area close to the university.

Police ransacked the campus, broke windows in the library and even fired tear gas inside a reading room. Many of the students injured and detained had not been involved in the protest.

The Jamia crackdown catalysed the protest at Shaheen Bagh, with a large number of its students having links to the community.

Daily protests also take place at Jamia, but they generally end up moving to Shaheen Bagh by the end of the day.

"The protest started the day female students at Jamia were brutally attacked and beaten up. Their hair was pulled," says Kausar.

In light of the Jamia crackdown and similar attacks in Muslim enclaves elsewhere, protesters in Shaheen Bagh worry that with every passing day that their sit-in might also get broken up.

"The authorities are rattled because they are facing problems because of us. Almost 150,000 cars [usually] pass through here every day," says Kausar. "They want us to give way to one side of the road."

'They woke us up, we were sleeping'

But with New Delhi currently in the midst of an unusually cold spell, Kausar has bigger worries.

"What I am concerned about are the women and children, they are on the road in this biting cold. Some have kids who are 2-3 months old. If something happens to them, who will take responsibility?"

"It's not a small thing to sit on these highway roads… [But] until someone comes and convinces us that our demands have been heard, we aren't going anywhere."

Begum is equally adamant. "They woke us up, we were sleeping," she says.

"It is better to die here [protesting] than be put in detention camps."

However, many in this Muslim neighbourhood remain fearful of what lies ahead.

As the night wears on, the crowd gathers around a projector to watch a documentary about what the government's citizenship policies mean for them. 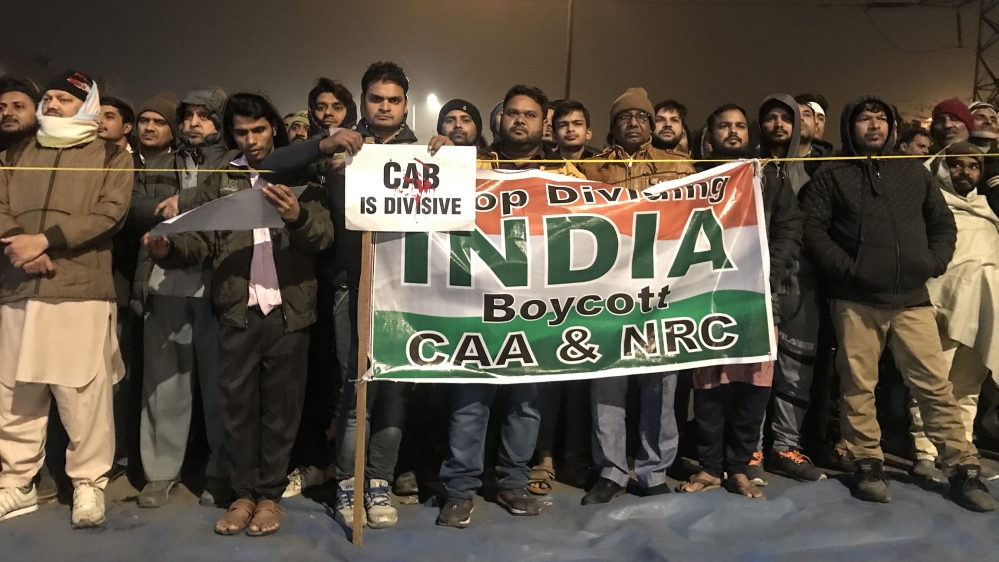 A clip from one of Modi's recent speeches beams from the screen.

"Those who are creating violence can be identified by their clothes itself," says the prime minister, his voice booming across Shaheen Bagh through loudspeakers.

Many in the crowd are wearing traditional clothes - men in skullcaps, women in burkas. Modi is speaking in innuendo, but he is talking about people like them.

It is one of the many comments made by BJP leaders and government officials, suggesting Muslims do not belong.

For 48-year-old Maqsood Alam, it couldn't be further from the truth. "We were born in India. India is our soil. We love India," he says.

Yet, having to prove that he belongs is a frightening thought for Alam. Like many Muslims in this part of the capital, his status as a migrant worker only makes documentation more complex.

As a result, the father of five seems resigned to a fate of not passing a potential citizenship test.

"The future of our kids is at risk. We went to such lengths to allow them to study. Now where will they live, where will we live?" he asks.

"A child is like a tree, it takes time and effort to grow," says Alam, breaking down as he finishes his sentence.

"They are asking for papers that go back years. I have nothing to prove [my status], I am just a poor man."