Without massive help these people will not be able to rebuild their lives. We feel that the compensation announced by Delhi government is not adequate for the purpose. 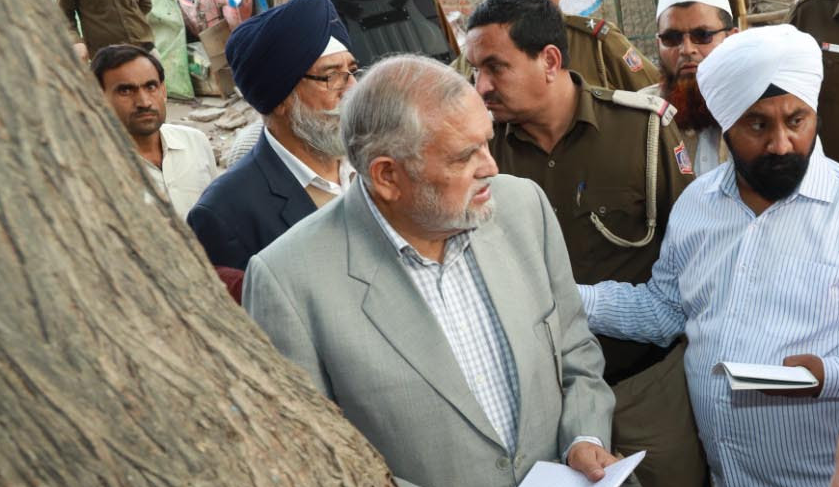 New Delhi  (Asia Times News Desk  ) A delegation of Delhi Minorities Commission, comprising of Dr Zafarul-Islam Khan, Chairman, and Kartar Singh Kochhar, Member, visited the violence-affected areas of the North East District of Delhi. The Commission started its tour of the area by meeting the area ACP and DCP who explained the problems involved in policing, rescuing and rehabilitation. They claimed that policemen bravely rescued hundreds of stranded people who were surrounded by mobs, like rescuing 350 Muslims from Sherpur on 25 February. Later the delegation, accompanied by some police officers and members of the Commission’s peace and minority advisory committees, toured the affected areas. Here is what the commission found during this tour

We found extensive damage to Muslim houses, shops and workshops everywhere we went. We found that people were visiting their damaged homes and houses for the first time since they fled on 24-25 February but since the houses and shops were badly damaged and the debris were lying inside as well as on the streets, there was no question that they will be able to start living there again any time soon. Moreover, removing debris or starting repairs will affect their chances of getting any compensation from the government.
At a parking lot near Ambedkar College, we found burnt hand-carts (thelas) and tractors. The guard at the site told us that 100 hand-carts and 11 tractors were torched and a school bus, still parked at the place, was extensively damaged. The attackers took away whatever they could like batteries of the vehicles before torching them.

At Yamuna Vihar, on one side of the road are Muslim houses and shops while on the other side are Hindus’ houses and shops and both areas were affected by looting and burning. At a charred petrol pump, the owner Mahinder Aggrawal claimed that 30 vehicles were torched there.
At Bhajanpura, we found that Muslim-owned shops, like a travel agency and motorcycle showroom, were looted and torched while Hindu-owned shops were left untouched.
We also also saw Councillor Tahir Husain’s factory building which was still under construction. He is an accused in the riots.

At E-Block of Khajuri Khas, we found Muslim shops burnt. A police officer claimed that the area DCP saved 350 Muslims from the locality.

In gali no. 5 of Khajuri Khas, residents told us that violence started there late in the night of 23 February shortly after the threat and ultimatum of Kapil Mishra. This gali is a blind alley where 100 persons lived and they could not on their own flee from the main road. They left the place under police protection in the morning of 25 February. In this gali, we found the house of the BSF jawan Mohammad Anis, which was badly damaged. He was not at home at the time though four members of his family were present there. We saw here a carpenter’s shop owned by Muhammad Ilyas which was looted and badly damaged.
In 3/51 Khajuri Extension, Jameel Ahmad has car repair garage where seven cars, six autorickshaws and nine motorcycles were burnt. He told us that Hindus took away their cars hours before the garage was torched and its building was looted and damaged.

At C-429 in gali no. 29 of Khajuri Khas, we saw the gutted Masjid Fatima where people had taken refuge in the belief that mobs will not attack a religious place. Masoom Ali’s damaged house is adjacent to the mosque. He told us that the SDM was telling them that residents of one house will get only one compensation irrespective of the number of families living there.
In the same gali, there is house no. C/1/28/413 which belongs to Prem Chand, Delhi Police ISI who had let it to a Muslim family since 2007. The house was torched after the family fled the place. The rioters returned later to burn it once again.

In Brijpuri, we found the 30-year-old Arun Modern School owned by Bhisham Sharma who was a Congress MLA several times. It was extensively burnt and damaged in the evening of 25 February. Removables like computers and even steel railings and CCTV cameras were looted. 800 students study here. This was the only place where we found repairs going on, on war footing, perhaps to reopen the school at the earliest.

In Shiv Vihar, we found two schools which both were occupied by the goons who had come from outside the area. The first is Rajdhani Public School owned by Faisal Farooq and the other is DRP Convent School owned by Pankaj Sharma. Both share a wall. At Rajdhani School, driver Raj Kumar told us that some 500 persons barged into his school at around 6:30 pm on Monday, 24 February. They wore helmets and hid their faces. They remained there for the next 24 hours. They went away next evening after the arrival of a police force in the area. They were young, well-built people who had arms and giant catapults which they used to throw petrol bombs from the school roof to other houses across the road. Some of them used heavy ropes, still in the school, to climb down into the other adjacent school. They took away the computers and any other thing they could carry and smashed and burnt what they left behind.

At DPR School, we were given the same description of the people who occupied the Rajdhani School but more people, upwards of 1500, stayed here for over 24 hours from 24th evening. They climbed down into the school from the roof of the adjacent Rajdhani School. Roop Singh, guard, gave us the same description of those people as given by the Rajdhani School driver. Singh told us that he somehow saved himself and his family by slipping away from a rear door. He lived with his family in a quarter inside the school. He told us that these people looted or burnt everything in the school. We found in the school open area a mound of burnt desks with only their steel frames intact. They were going to fix new wooden tops on those frames. Rajdhani School gave us a photograph (attached) of the mob which had occupied it for over 24 hours. In it, young people are seen wearing helmets and covering their faces. The guard of the DRP School confirmed that same kind of people occupied his school also. Over 2000 such people stayed in the two schools for over 24 hours. They used to go out in small trucks in shifts of 2-3 hours each time to execute their looting and burning mission outside. Their food was brought to them inside the school. It was clear that they had local people helping them.

In Shivpuri, Muslim are a small minority. It is the worst affected area, we found outnumbered Muslim homes selectively burnt and damaged. We found here Aulia Masjid which was gutted and badly damaged. The floor of the mosque was hidden by the debris and two gas cylinders were lying on the floor. Apparently these could not explode. Most houses were blasted using gas cylinders taken from other houses. We found here in gali no. 10, the bakery of Iqrar son of Mohammad Afsar which was looted and later burnt in the night of 25 February.

There are many affected localities in the North East district which we could not visit. Moreover, thousands of people have fled from the area and gone to their villages in UP or Haryana or were living with relatives elsewhere in Delhi. Hundreds are still living in camps run by the community. Some are also living in camps run by the Delhi Government.

It is our assessment that the violence in North East district to Delhi was one-sided and well-planned in which maximum damage was inflicted on Muslim houses and shops with local support. Without massive help these people will not be able to rebuild their lives. We feel that the compensation announced by Delhi government is not adequate for the purpose.